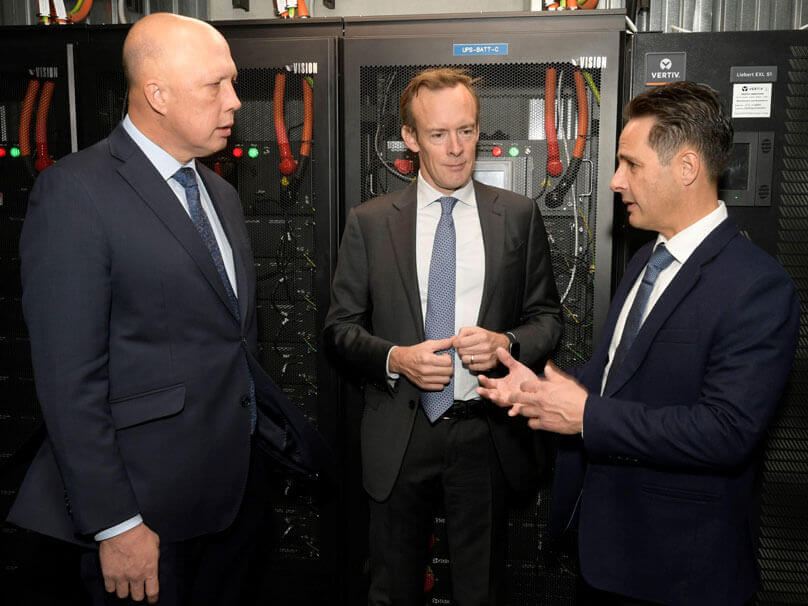 The IC5 Bunker data centre was completed on time and on budget during the pandemic. It is part of a wider A$200 million investment by Macquarie Data Centres into its sovereign Canberra and Sydney Data Centre Campuses. The facility provides a fully sovereign ecosystem in terms of the supply chain, Australian Government security-cleared staff, data access and storage.

Built specifically to support government data, IC5 is IRAP and DISP accredited and is capable of housing up to Zone 5 top secret data.

The unveiling comes as cyber security becomes a bigger issue in Australia following a series of cyber-attacks that have damaged media, agriculture, energy and other sectors in recent months.

“The need to secure data to protect Australian businesses and government has been a maturing conversation over the last few years. The threat is evolving. We know there is increasing investment in penetrating systems throughout the world. To meet that threat, the Systems of National Significance Legislation and the Securing of Critical Infrastructure Legislation is essential,” Minister Dutton said.

“Macquarie is a globally recognised leader in its field with a particular focus on data storage and protection services. In our current threat environment, the demand for those services can only increase.”

IC5 Bunker leverages the latest physical, virtual security and compliance credentials to manage highly classified government cloud workloads. The facility is considered by the Government as Critical Infrastructure, given it has been designed to store important government information. It has also recently been Certified Strategic under the Morrison Government’s Hosting Certification Framework, a measure of the trusted Government places on the facility and the sovereign controls that are applicable to it.

Speaking at the unveiling, Macquarie Data Centres Group Executive David Hirst said the team was proud to welcome Minister for Defence, the Hon. Peter Dutton to the new facility, and that the minister’s interest is a measure of the government’s commitment to protecting Australia’s sovereign data.

“Our IC5 bunker is built to the highest physical and electronic security standards, leveraging the accelerating trend of hybrid IT and cybersecurity needs across government,” he said.

“The delivery of this facility and Intellicentre 3 (IC3) in Sydney over the past year, when many supply chains were challenged by COVID, is a testament to the Macquarie Data Centres team and our partners. At a time when Australia needs strong economic growth, recent research has shown that data centres like these support the creation of more than 1,600 onshore jobs.”

Macquarie Government Managing Director Aidan Tudehope also spoke at the unveiling, highlighting the importance of collaboration between industry and government to combat cyber threats in Australia.

“We are proud to welcome Minister for Defence, the Hon. Peter Dutton to IC5 Bunker” said Tudehope. “His interest in unveiling our facility is a measure of the Government’s commitment to ensuring Government agencies and critical infrastructure operators and their supply chains are ‘battle-ready’ for the challenges we all face in the cyber domain.

“This means protecting Australia’s sovereign data and demonstrating the importance of cyber security to the whole of the Australian economy.”